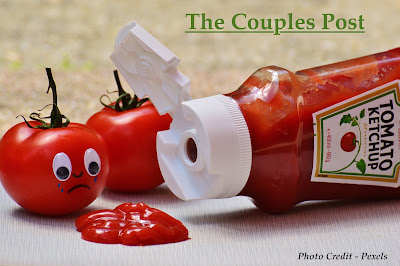 Janine:  I used to read into everything Ken said - well almost everything.  If he made a simple comment, I often took it as a personal criticism, even though he didn't intend it to be.  We still talk about the day, years ago, when he said, "Gee, we're almost out of ketchup."
I assumed he was pointing a finger at me and accusing me of not paying attention to every detail like I thought "a good wife" should.  (I know - as I look back on this now, it seems ridiculous.)  For some reason, I had the misconception that we were in some sort of competition with each other and that I had to prove I was a capable, responsible person.

Ken:  That evening (after I mentioned we were running low on ketchup), I noticed Janine was extra quiet, and there seemed to be something wrong.  It would have been easier to just retreat, but I didn't like the sour mood and wanted to know what was going on.  So, after receiving a bit of the cold shoulder treatment, I asked Janine what was bothering her.

Janine:  It took me some time to process what had happened and why I was bothered by Ken's ketchup comment.  I explained what I THOUGHT he meant by his statement.  He then explained there was NO hidden underlying message.  He just noticed we were almost out of ketchup and stated the fact - nothing more than an observation.  I guess I had such a fragile ego that I took things WAY too personally.  I realized later how my past experiences and family of origin stuff had muddied the waters. 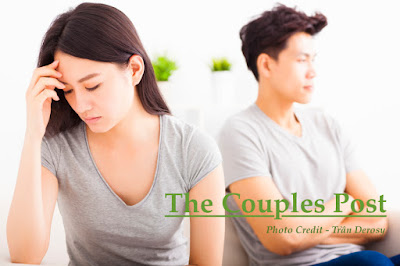 We all bring our issues and baggage with us when we enter marriage.  How can we sort through the web of feelings and miscommunication unless we reflect and drill down to get to the root of what's going on?  That's what we needed to do that day.  Since then, whenever Ken makes an innocent comment and I get defensive, he says to me, "Is this another ketchup bottle issue?"  Then I stop and realize he's not criticizing me.  He's simply making an observation and I don't need to take it personally.

Ken: The Moral oaf the Story:  Communication. Communication. Communication.  Ask questions.  Seek to understand.  If you THINK your spouse is sending you a message that rubs you the wrong way, ask for clarification.  Don't assume (or IF you do, assume positive intent).  This isn't an easy problem to fix, and we're still working on it.  BTW, we usually have 1 (or 2) back-up bottles of ketchup in our pantry, so if you run out feel free to stop by.

By Chris and Michelle March 22, 2021
Michelle: When I was a teenager, I remember coming home after breaking up with a guy and my dad asking me how it went. I gave the inevitable teenage response, “I don’t want to talk about it.” My dad responded, “You don’t have to. But you do need to remember that there are some things in life that you can’t afford to edit out of your story. Is this one of them?”
Post a Comment
Read more

By Nick and Jen March 14, 2021
It's easy to get lost in our day-to-day. Once we're out of the honeymoon phase of marriage and real life settles in, we develop routines and patterns of behavior. We become consumed by the here and now, and sometimes we can lose sight of the excitement and passion that brought us together and inspired us to get married in the first place.
1 comment
Read more

The Healing Power of Touch

By John and Julie March 08, 2021
Our last blog explored a super power we all have within us – the Super Power of Affirmation.    But did you know that you possess another Super Power?  It’s the Healing Power of Touch.  Holy Hole in a Doughnut, Batman!  Bet you didn’t know you had all that in you!
1 comment
Read more

By Tom and Mary Frances Burke April 03, 2021
Dear Readers, As Spring unfolds and we continue to recover from this pandemic, there could not be a more wonderful time to nurture relationship growth. Wishing you a Happy Easter and a Springtime of Promise. From all of us at TheCouplesPost
Post a Comment
Read more