By Paul and Stephanie Francois July 21, 2019
This post originally appeared one year ago, but has been re-posted for those who may have missed it the first time around. 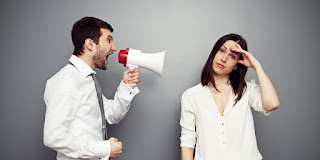 Something that we’ve become increasingly aware of in our marriage is how our tone of voice so significantly affects our communication – for better or for worse! It is remarkable how something so seemingly small can make such a huge impact on whether our communication is healthy, productive, and enriching or debilitating, disheartening, and provocative. Believe it or not, tone of voice is huge. WE would go as far as to say tone of voice is at the root of most of the small hurts we experience in our relationship.

Perhaps it would be easier to make our case using an example. Recently, we were trying to get out of the house to go to church and be on time. I (Stephanie) have to admit I am typically the one who is running behind trying to get one last thing put away or rushing because I did not plan my time well. Paul will often playfully turn the hall light on and off letting me know he is by the door ready and waiting. Usually I will laugh it off and tell him I am coming. This particular morning, however, I was feeling overwhelmed, anxious and rushed. Instead of responding to his playful gesture lightheartedly, I snapped at him with a sharp, “I’ll be there in a minute!” I had a poor me attitude thinking, ”Why am I the only one who sees dishes in the sink or crumbs on the counter?” My tone reflected my frustration and resentment, but I did not take the time to share any of that with Paul in a healthy way. He could tell I was not happy, but had no idea why. My tone turned what could have been a talkative and pleasant ride to church into 15 long minutes of silence. To Paul’s credit he did not respond in kind and instead allowed me some space to reflect on my own behavior.

We have noticed that if our tone expresses impatience, exasperation, and/or judgment, our conversation is likely going to deteriorate into hurt feelings or an argument. But if we pay greater attention to having a tone that is loving, patient, kind, and compassionate, we will usually respond in kind. For example, if Stephanie asks me what time we’re supposed to be at a meeting, I might be inwardly perturbed that she didn’t read the note I left her with that information. Well, whether she read the note or not, she still needs the information and it is still my responsibility to respond in a way that honors our vows. I can make a choice to respond with a kind and loving tone or one that lets her know I’m displeased with her inattention.

We are not suggesting that we stuff feelings of resentment – we must express those in a healthy, constructive way. What we are suggesting is that in the heat of the moment will likely not be the best time to do so. At the end of the day, our words can either be life-giving or life-draining. The choice is ours.

By Chris and Michelle March 22, 2021
Michelle: When I was a teenager, I remember coming home after breaking up with a guy and my dad asking me how it went. I gave the inevitable teenage response, “I don’t want to talk about it.” My dad responded, “You don’t have to. But you do need to remember that there are some things in life that you can’t afford to edit out of your story. Is this one of them?”
Post a Comment
Read more

By Nick and Jen March 14, 2021
It's easy to get lost in our day-to-day. Once we're out of the honeymoon phase of marriage and real life settles in, we develop routines and patterns of behavior. We become consumed by the here and now, and sometimes we can lose sight of the excitement and passion that brought us together and inspired us to get married in the first place.
1 comment
Read more

The Healing Power of Touch

By John and Julie March 08, 2021
Our last blog explored a super power we all have within us – the Super Power of Affirmation.    But did you know that you possess another Super Power?  It’s the Healing Power of Touch.  Holy Hole in a Doughnut, Batman!  Bet you didn’t know you had all that in you!
1 comment
Read more

By Tom and Mary Frances Burke April 03, 2021
Dear Readers, As Spring unfolds and we continue to recover from this pandemic, there could not be a more wonderful time to nurture relationship growth. Wishing you a Happy Easter and a Springtime of Promise. From all of us at TheCouplesPost
Post a Comment
Read more