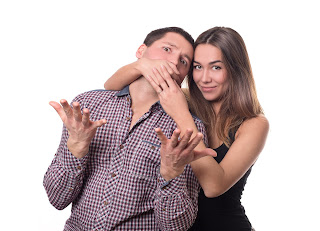 CHRIS:
I knew Michelle was the one from the moment we met. But the thing that made it unquestionable for me was when we went shopping together right after Christmas and the store clerks were busy changing out shelves to Valentine’s Day items. Michelle turned to me and said, “Good grief. If that isn’t the perfect image of how commercial that holiday is...”. I was hooked. She was beautiful, smart and placed absolutely NO value on Valentine's Day.  Fast forward a few years into our marriage when a simple Valentine’s  gift turned out to be not so simple.

Over the years leading up to that gift, I had been gently hinting (some may say nagging), Chris about his language. It was nothing for him to drop some colorful language whether he was happy, upset or in pain. And heaven help anyone who had to endure his language during a football game. To say I was surprised about the gift, is an incredible understatement. But there it was, a swearing jar. It came with a cute little tag that read, “I will pay a dollar for every cuss word that I holler (or say or whisper but not think because that’s not fair)!”

I laughed and said, “Looks like we will be going on a really good vacation this year. “

I took Michelle’s flippant comment as a personal challenge. I retorted, “Okay, if I don’t fill up the jar, I will play golf whenever the mood strikes me, and if I fill up the jar, we will go wherever you want to go on a vacation.“

The interesting thing is not where we ended up going for vacation (Disney World), but that when he was trying so hard not to cuss, I missed the real and genuine Chris. The guy that dropped the f-bomb because ceiling fans are hard to install.  The same guy who called his golf clubs a dirty name after a bad shot.  After we returned from Disney World, I presented him with a gift of my own. A couple of golf outings for him and his buddies and a recent study I had come across.  The study was in regards to people who cussed.  It stated that people who cuss have a higher intelligence, a stronger ability to manage their own pain and an increase in physical strength.  So, while I may not value the over-commercializing our society has done to Valentine’s Day, I do appreciate taking the day to recognize all of the many reasons I fell in love with my husband; even his damn cussing!!! 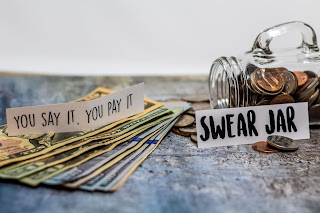 Loving Your Way through February

By Nick and Jen February 01, 2021
It is said that February is the month for lovers. Having five kids in 10 years, Nick and I spent many years focusing on kid activities for Valentine’s Day. But romance has always been a priority for us, and if February has to be an excuse to be romantic, I say bring it on!
Post a Comment
Read more

By John and Julie January 25, 2021
JULIE: I’m not a superhero.   While I can’t fly faster than a speeding bullet, make myself invisible, or read people’s minds, I CAN harness the super-power of affirmation by   telling John the numerous reasons he is special to me or the many traits I admire in him.   Never underestimate the super-power of affirmation to build up your spouse and enhance your relationship.
2 comments
Read more